After months of rumours, the new MacBook Pros are here, packing new hardware, a new design, and an undeniably cool OLED panel on the keyboard.

It’s been four long years since the MacBook Pro saw a major update, and even that one – the Retina Display – was seen as very overdue when it arrived.

For the photography community, the SD card is still crucial. Every single camera company still relies on the SD card as its primary storage solution. It’s ubiquitous. And even though there are alternative methods of transferring your media off of your camera and onto your laptop, right now nothing comes close to replacing the utility of the SD card.

Headphones Jack: Apple removed the headphones jack from the iPhone 7 but kept it on the MacBook Pro. They have put so much effort to promote the uselessness of the jack, then kept it on all other devices. People appear to have settled down about it, but there are alternatives to the headphone jack.

iPhone 7 connector: If you have purchased an iPhone 7, guess what? You will need another adaptor/cable to hook it up to the new Macbook Pro.

Adapters: Whatever devices and peripherals you have at home or work, get ready to buy plenty of adapters to get them working with the new Mac Book Pro.

More importantly, the computer maxes out at 16GB of RAM — many pro users want 32GB or more, which is not possible on the new machine, sadly.

They confirm that Jony Ive and Apple’s designers have added a touch bar to the company’s top-of-the-line laptop. To make room for that, Apple completely got rid of the function keys that’ve been at the top of Mac keyboards for years. Physical esc key? Gone. Same for the brightness buttons and volume controls. They’re history. Apple wisely seems to have combined the power button and Touch ID sensor, though it’s not yet clear whether this button is actually mechanical.

MagSafe was one of those tiny but brilliant innovations that made you question how no one else had thought of it yet. Rather than having a power cable get locked into a laptop — leading to the possibility of someone tripping over the cable and yanking the computer onto the floor — Apple’s MagSafe cables attached magnetically; strong enough to hold on, but weak enough that they’d rip off instead of taking a computer with them.

With the switch over to USB-C for charging, MagSafe is almost nowhere in sight. While it’s still present on the MacBook Air, it’s absent from both the MacBook and the new MacBook Pro. And it doesn’t seem likely that we’ll see it on any Apple laptops going forward. USB-C just isn’t meant for that kind of use.

Apple’s MacBook Pro will use a proprietary SSD, preventing Mac users from upgrading their storage solution themselves using standard parts. This SSD is an NVMe SSD which uses an Apple-designed SSD controller, the SSD is secured inside the system using some strong tape, making the SSD difficult to remove.
The SSD uses a unique mounting solution and a proprietary interface, which will prevent MacBook Pro users from upgrading their systems with larger or faster SSD solutions in the future. 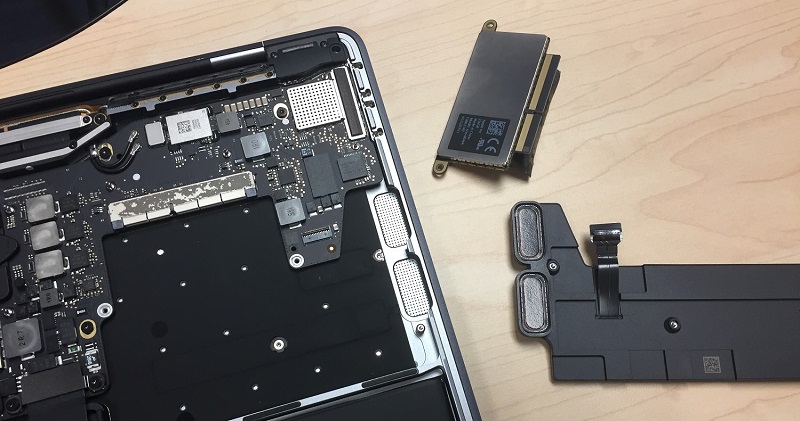 One of the biggest complaints is Apple’s apparent switch to USB-C… and only USB-C. There are four ports — three more than the 12-inch MacBook has — but none of them are standard USB ports.

A photographer’s travel kit consists of a laptop, a phone, a power bank, a camera, a portable HDD and a thumb drive. If that laptop is the new MacBook Pro, nothing will connect to it without an adapter. Nothing!!

13-Inch MacBook Pro
Starts at $1,799 (US), and features the revolutionary Touch Bar and Touch ID, a 2.9 GHz dual-core Intel Core i5 processor with Turbo Boost speeds up to 3.3 GHz, 8GB of memory and 256GB of flash storage.

15-Inch MacBook Pro
Starts at $2,399 (US), features the revolutionary Touch Bar and Touch ID, a 2.6 GHz quad-core Intel Core i7 processor with Turbo Boost speeds up to 3.5 GHz, 16GB of memory and 256GB of flash storage, and ships in two to three weeks.